McLaren Automotive – one year on It's easy to forget that in creating the MP4-12C, McLaren also created a new car company: McLaren Automotive. Setting up a production facility, supply network and a dealer network in addition to a new car that has to take on a rival as strong as the Ferrari 458 Italia is some challenge.

A year down the line, I paid a visit to McLaren's James Bond-style headquarters in Woking to see how one of Britain’s newest car companies is shaping up.

The order books seem healthy. More than 1100 MP4-12C coupés have been delivered through 38 dealerships in 22 countries. Three of those dealerships are in the UK – London's Knightsbridge, Warwick and Manchester – and the home market is tipped to settle as McLaren’s third biggest from 2013 after the US and Germany.

Indeed, more than half of all McLarens in the future are expected to be sold in the US, up from 40 per cent in the early days of trading.

McLaren ultimately aims for 70 dealerships, with the biggest market launch yet to come being China. And with McLaren’s stated aim being to sell 4000 cars a year following a new model launch every year until then, success in China will be essential in achieving that goal.

And now with the 12C Spider, dealers have a second model to sell. So far, more than half of the orders for the drop-top have come from existing MP4-12C coupé owners. The company says this is encouraging, because it shows the McLaren ownership experience is a positive one.

Others are buying Spiders in addition to the coupé and not trading in. But those coupés that are being traded in are currently being geared up to enter into a new McLaren Approved Used Car scheme that’s likely to be launched by the end of the month. Protecting residuals is McLaren’s latest challenge in starting a car company from scratch.

It’s British buyers who are ordering more 12C Spiders than any other market, the terrible weather of this summer clearly doing nothing to dent Britain’s love of open-top motoring.

And the common MonoCell chassis that underpins both coupe and Spider means both can be built alongside one another on the same line at any ratio.

Who’s buying the MP4-12C? A lot are being bought to complement car collections, but there are those being bought for everyday use. Some American buyers are doing as many as 1000 miles per month in their MP4-12Cs.

McLaren buyers are also getting a say in how the current and future products develop. The recent round of revisions for 2013 to the MP4-12C – including the option for more engine noise to be played into the cabin and a button to release the doors in place of the current swiping system – were all born out of customer feedback. Maintaining this level of personal service is another challenge as McLaren’s volumes increase.

Perhaps the most interesting growth part of McLaren’s business is with its mysteriously named McLaren Special Operations. The department was responsible for maintaining F1s and SLRs but now has added customising MP4-12Cs to its job description.

The number of customers going beyond the standard option list has risen from an initial one in 10 to around 15 per cent now, but is expected to reach one in four by the end of the year. Requests have ranged from special stitching for the steering wheel to the installation of a coffee machine.

The £200,000 and above MP4-12C is now the norm as a result of the bespoke work of McLaren Special Operations.

So an eventful first 12 months. And the next? Spiders will be delivered before the year is out, and it’s highly likely the next McLaren we’ll see as part of the 'new model every year' strategy will be the F1 replacement, which has been regularly spied. Can this be the car to go one better than the MP-12C and topple a Prancing Horse?

Official press release has been published on McLaren website, with a small selection of pictures. Head on this blog page for the press release, or go on the official page here. Configurator is already available online ! I'm pleased and proud to unveil our innovative new 12C Spider. This car challenges the laws of aerodynamics and defies the disadvantages of its roofless counterparts. As far as convertibles go, it's in a class of its own.

With the 12C Spider, every part tells a story. The car is built on the same ultra-rigid carbon fibre chassis as the 12C Coupe, yet we have engineered a hard top roof which is retractable at speeds of up to 30km/h. Even with the roof down, we have succeeded in meeting our aerodynamic targets, while delivering uncompromised handling and performance.

Just as speed is our driving force, weight is our mortal enemy. That's why we set out to build a convertible with a weight increase target of no more than 50kg. Actually, we weren't satisfied until we reduced it to 40kg.

We also designed one of the lightest and most powerful engines in the world, specifically for the 12C. Along with the patented, intuitive gearbox, the Formula 1™ inspired Brake Steer system, and the revolutionary ProActive Chassis Control, every single component of the 12C has been intelligently crafted to deliver optimum performance.

The 12C Spider is indeed a convertible without compromise... If you're interested in finding out more about what makes it so unique, please visit our website mclarenautomotive.com.

The story of the 12C Spider is just beginning. To watch the rest of it unfold, keep a watchful eye on McLaren's Facebook page. There's plenty more to come.

Visit to the factory by Piston Heads 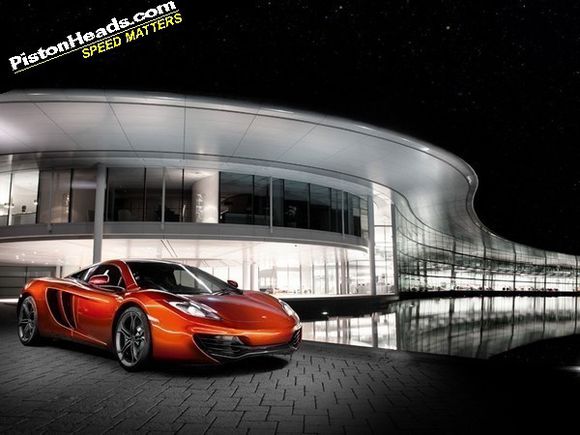 Piston Heads recently published an interesting article to relate the visit they and some customers did at McLaren's factory. Follow the link for the full article.

Fot those who can get the English Autocar magazine, don't miss this week's edition with a special separate booklet dediacted the the MP4-12C. The last time they did something similar, it featured the McLaren F1, so this is really a special edition! I haven't started yet to read it, but I will try to summarize it when I can find some time

For those in France, be careful, some shops are selling the magazine wihout the bonus dedicated to the MP4-12C... a pity!

As car car passionate, I have taken the habit to focus my attention on some specific cars and gather as much data and information on them as possible. Recently, I did it for the Porsche 911 GT2, the Mercedes SLS AMG and the Nissan GT-R, but I never went public to start a blog like this. The new McLaren MP4-12C is next in this list and it created such an interest in me that I decided to do the big jump and start this blog, that I will try to feed with articles both in English and French.

I have already uploaded technical informations from the Official Press releases and I am now in the process to go through the coverage of the first reviews. After that, I will try to go back in time and dig older articles, waiting for the full test reports that will come, I assume, this summer. I hope you will find every interesting piece of information on this site and look forward for your comments !

Some links towards McLaren website: the MP4-12C webpage and the configurator of the car. Also the "official blog" called McLaren Inside Out. I have just published a few technical pages, available from the links on the right column. Those are transcripts of the official press release made September 9th 2009, when the MP4-12C has been officially unveiled.

I have opened this blog to gather a maximum of information on the new McLaren MP4-12C, a car which will bring fresh air and a big change in the supersports cars territory. This blog will be updated both in English and French with news gathered on internet, paper magazines... I will not translate my French or English sources but will do my best to make some summaries. The first posts on the blog will be related to the various official Press Releases from McLaren to present the car.